As the snow has weighed down most of the nation, I feel like the stress of work has weighed me down.  Our generous vacation of nearly 3 weeks was wonderful to recharge and reset for the New Year, but 3 days in and I am starting to feel it already!

I love my job.  I love that I am working on 100 different projects at one time, 4 or 5 “departments” that need me at once, new ideas coming to the surface, not to mention day-to-day tasks and the unknown always popping up in my inbox and flying across my desk. But sometimes at the end of the day, you just need a glass of wine to recharge for the next day.

It has been a fabulous 2014 thus far, and I am excited to say that it will be an amazing year.  I was accepted to grad school and will be moving to Chicago to pursue my Masters this summer!

2014 is going to be the year to cross things off of my bucket list. I already have 3 ready to go. 1. Move out of Michigan 2. Move to a large city (my favorite none the less) 3. Pursue my Masters.

I love the New Year.  I love the thought of a fresh start and a clean slate.  Any day can be a clean slate, but for me, nothing gives hope like starting off the year on the right foot.

What are you all hoping to do or accomplish in the New Year?

Here are a few pics from my holiday and 2014 adventures thus far!

A shot after the ice storm in downtown East Lansing

Our New Year was spent celebrating the birthday of the 2 goldens in the back. It was such a great time with some of my dearest friends. (Look at the handsome ones in the middle)

We headed to Chicago for a work event and walked past our future apartment (we hope), and this could be my front door!!

My future Starbucks. How cute is that?

We headed up to Winnetka/Glencoe to visit a great friend of ours. CUTEST villages I have ever seen. 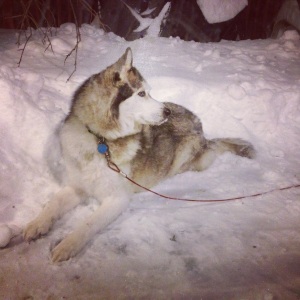 My handsome snow bear right after our massive snow storm.

Happy New Year to all!

The Smithsonian announced that they found a new species of mammal that could only be described as a mix between a house cat and a teddy bear.  I needed to document that I have had one of those for years….

Some times you are just too busy living life to document it.  A double edged sword for someone like me, but here is a quick recap of what I have been up to:

Some beer garden action in Ann Arbor for a dear friend/aunt’s birthday. What an amazing night. The weather was beautiful, the food was amazing, and the company was second to none. 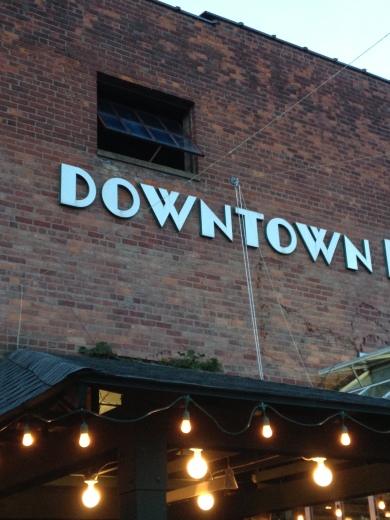 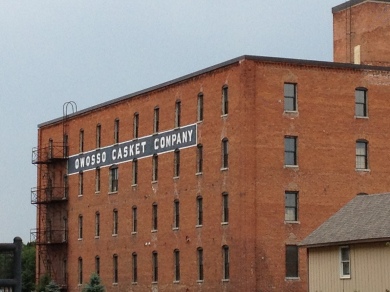 This is his best pose…

We were all excited to go to the Wrought Iron Grill in Owosso for restaurant week, only to realize that restaurant week had ended the night before.  AMAZING food was still consumed, and I would highly recommend this charming spot if you are ever in Owosso, MI.  Although, I am not sure why most people would be.

This dinner alone should have its own post, because it really was like a  bad (or good) Seinfeld episode.

Let me just start with, our waiter was super cool, after we broke him in, and the food was really really delicious, but the service was terrible!  We opted to sit outside on the patio, but regretted that decision because our waiter was a little too lax.  We didn’t even get greeted or get water for 15 minutes (first world problems, I realize, but this is all going to show a point).

Our waiter offered us “coke products”, to drink and we had to snag a beer list from him (that never happens… turns out he didn’t think we were 21… thank you?). When Paul asked what was on tap, the waiter said, “it’s all crafty stuff” as if we would not recognize anything they had.  If you know anything about Paul, you probably know that he is obsessed with craft beer.  It is his hobby, his passion.  We asked for the beer list, and got it 10 minutes later.  The first world problems continued when we ordered our beers (a snifter, not a pint, the waiter asked) and it was given to us in bottles…. typing this all sounds so ridiculous, but again, I am just making a point.  Beer like the one we were drinking tastes different in a snifter (all 12% of it), and really needs to breath.  But, 10 minutes later we got our snifters.  This was all happening, mind you, while the waiter was fawning all over his buddies at the next table.

Me, being the nice person I am and not wanting to offend the waiter, told Paul that we should move inside.  We had already been there about 35 minutes and hadn’t even ordered yet (not due to us not knowing what we wanted, I assure you).

When the waiter came back, who really was a very nice guy, I told him that we wanted to move inside because I was getting cold.   He said, “oh, no problem, I can just turn on one of these heaters”, pointing to the massive propane heaters they have on the patio.  I looked to Paul for support, and he just laughed at me and kept on drinking his beer, (he loves to see me in awkward situations).  So the waiter drags this massive heater over to our table, and it won’t start.  The tank is empty.  All I could think was, “God is going to make that thing blow up to punish me”.  With no luck, the waiter picks up ANOTHER heater and drags it over to our table, which still wont light.   This goes on for a good, awkward, 5 minutes or so.  I finally just told him not to worry about it, feel free to spit in my food and thank you so so much.  (Yeah, I totally looked like that high maintenance bitch).

This finally cracked the guy and he decided he liked us.  It was almost like we had to prove ourselves as cool for him to want to serve us.  After that he was great.

And then, toward dessert, Paul decides to have a serious talk… about our aging dog.

I am not a crier, but he just said the words, “so, while things are good and he is healthy, I think we should talk about what the plan should be for when Max dies.”

I immediately bust out into sobs, tears running down my face, and I can’t even form sentences.  The poor waiter came back, who we had just gotten to like us, and looked at us like Paul had hit me or something.  It was a smart move on Paul’s part, really, because I told him what medications to feed me and what to do with Max once that does happen, because I will be incapable of taking control of the situation.

I continued to cry the whole way home… the ENTIRE 40 MINUTE DRIVE…poor Paul looked like he had just set off a bomb on a school bus full of kids or something.  My crying only stopped once we got home and I got to snuggle my puppy (my aging, 10 year-old puppy, who is in perfect health, btw).

Puppy and me the next day, living the life 🙂

Ok, so that was that adventure…. moving on…

The next day, Paul and I headed to the Tiger’s game with my BFF, Liz, and her husband.  I am not going to lie, I don’t remember much after the ball park margaritas started flowing, but I do know that it was a very fun time, and my sweet sweet man bought me everything that was requested from my drunk mouth (a soft pretzel, nachos…) I mean, why else go to a ball park?

This weekend, I have a half marathon coming up, a family function (pseudo family, but I have adopted them), and more adventures to follow.

I always aim for my summers to be full of adventures, but this one really has been.  I have spent time with so many great friends, made new friends, and done a lot of cool stuff.  And August is only going to be busier!

I hope everyone is well 🙂 Happy last day of July!