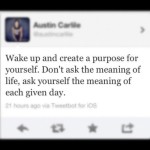 Done and done… Time for another 1

It was an early start to my day due to the commercial shoot at State of Fitness!!!  It is always a lot of fun getting testimonials from our members and hearing how we impact peoples lives, makes me love my job that much more 🙂

We just put this up in the lobby so you can read it as you leave.  LOVE IT!

Now I am fueling for my run with a big ol’ salad… super clean eating until October!

I know I suck at presentation, but breakfast is a 2 egg omelette with sun dried tomatoes, broccoli and mushrooms topped with avocado… Totally forgot the kale though 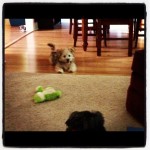 Last night I went to a “Blizzard Beach” themed party for my companies marketing firm.  Let me tell you what, they put on one HELL of a party!

It was their 10 year anniversary, so they had 2 open bars, amazing food catered by the best restaurant in town, a band, a “beach” they had made themselves, and loads of their clients, along with the mayor of Lansing.

It was all fun and games until our account executive, Jeff, a super cool guy, was talking to me about how they created their beach when I, in typical Steph fashion, knocked over his bottle of beer, shattering it on the ground.  Jeff suddenly says, “I have a huge gash in my foot”, and we look down to see a massive cut just below his pinky toe.  He quickly turns around and hobbles into the office.  Sure enough, my most recent spill had caused blood shed, complete with chunks of flesh and blood clots mixed in with the beer and glass on the concrete.

He was so cool about it saying that it was probably he who had actually knocked it over, but I assured him that I am a walking catastrophe, and if he knew me better, he would have no doubt as to who actually knocked over the beer.

Did I mention that I wasn’t even drinking?  Yeah…I’m fun at parties.

BUT on a good note, it really was a great night/day.  It was one of those days where I was totally in love with my little/big city.  I love being involved and being out and about, seeing people I know and meeting new people.

I did meet a girl who has a program in the area that is trying to promote physical fitness and running amongst the younger generation, so we started chatting and I believe I am going to be jumping in to that endeavor 🙂  So it wasn’t a total wreck of a night.

I ended my fabulous day with grocery shopping with the man, and we LOADED UP on fruits and veggies.  I love that “home from the grocery store with fresh produce” feeling 🙂

Have a great day!