This recipe really tested my skill level in the kitchen. Broiling, carving, bagging, this one was certainly an adventure.

The shopping was all pretty straight forward, until I got to the “Poblano chiles”, because, according to Meijer, they are “Poblano Peppers”. Enter, exhibit A: 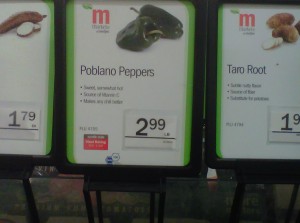 Alas, I believed it to be the same, so off to the check-out we went, and from here on out they will be referred to as “peppers”. This actually wasn’t the first “interpretation” I made on this recipe, for example:

“Place tomatoes and tops, if desired, on a jelly-roll pan”

What the H is a jelly-roll pan? Google tells me it is just a baking sheet, so all systems were a go.

The broiling turned out to be way easier than I thought it would be, since it was just a button on the oven next to “bake”. I used to be under the impression that broiling was a fancy way to boil something in a frying pan. Oh, how adult-hood is changing me. 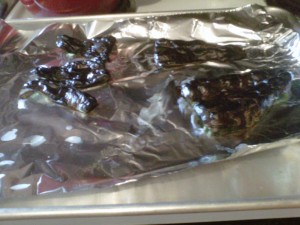 I was a little unsure about putting the broiled peppers into a paper bag, but then realized it was probably to dry them out, making the skinning process easier. 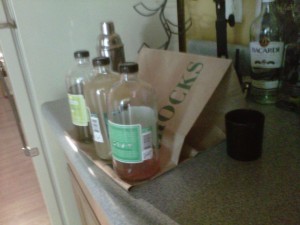 A Horrocks bag sealed with drink mixers is kind of the same thing the recipe asks for. Paul tried to take a picture of me putting the peppers into the bag, but said my face looked too disturbed.

Skinning the blackened peppers, by the way, not annoying at all! Just kidding, it was a total pain in my butt.

The tomato carving was the most nerve-wracking part for me. I was deeply afraid of failure in this step, but, I am happy to report that I was very successful! I envisioned a massacre, but it was very much like carving a pumpkin. Just don’t stab through the bottom (or a side) and you are all good. 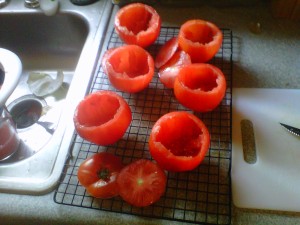 I actually did the tomato carving first, that left the pulp to pretty much drain itself while I was preparing the peppers, onion, and corn. By the time I was ready to go back to it, I had very little pressing to do.

Confession time: I didn’t rinse my quinoa. I never do. I am a second child, I ate stuff off of the floor, got pacifiers straight out of the dirt, and shared my ice cream cones with the dog. I doubt my life will be saved now by rinsing quinoa. It always turns out just fine!

I questioned whether the last step was necessary or not. What major difference could 1 and a half minutes in the broiler make? Paul, in all his wisdom, told me that baking will cook it all of the way through, and the extra broiling will crisp the top. Thank goodness for adult supervision while I’m cooking. 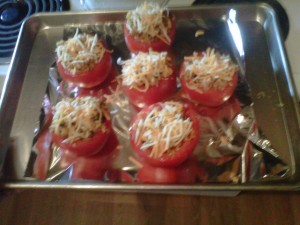 Ready to go into the oven!

What a flavor-full turn out! Even if you don’t like tomatoes, eating just the filling will satisfy you without an overwhelming tomato taste. And it looks so impressive and presentable! 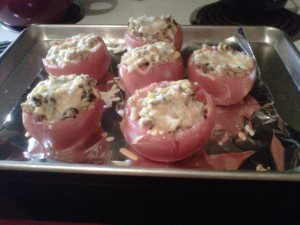 The only thing I might change is the quinoa to corn/onion/chili ratio. The mixture turns out to be mostly quinoa, but I believe it could be have a stronger flavor with more of the corn mixture.

All in all though, this seems like a very tedious recipe at first, but is one that can be mastered after just a few swings at it.

The recipe I will be tackling next, a little more in my comfort zone skill wise, is a beet salad. It will be my first go around with beets, so we will see how it goes!

I hope everyone had a safe and happy 4th of July!  i will post about my vacation sometime this week, I promise!