Not the norm for a Wednesday morning? … It was at least an exciting way to start the day.

I was taking a shower, all innocent like, when I noticed that the water wasn’t draining. After attempting to clear a hair clump from the drain, and only realizing there was not one there, I decided that the stopper must be down. Low and behold, the stopper was broken. The water continued to collect in the tub, but it was a shaving day, I had to keep going!

Five inches of water and two bare legs later, I step out of the shower, take one quick glance at our new plumbing issue, and decide it is best to wake up the manlier half for him to deal with (sorry, hun).

Assuring me he can handle it, I head down stairs to make breakfast and continue my beautifying ritual to start the day. My english muffin preparation was interrupted by a slow “tap… tap… tap” sound coming from the dining room. I walked over just in time to see it turn into a solid stream of water coming from the ceiling.

I can’t explain the mechanics of it all, but in an attempt to check the stopper, another piece of the drain system revealed itself as broken, draining water out of the tub.

Paul, kneeling in an attempt to stop the bleed made an ever so calm request: “I need you to hand me towels and go get a bucket or something to get the water out of the tub and pour it into the toilet.”

I frantically dashed downstairs, knowing full well the only bucket we own is in the basement. Forget that! I don’t have shoes on, it is scary, and it smells. I opted for a crystal bowl (it was the first I could find). FYI, lead crystal is not the easiest thing to scoop water with, but my arms felt amazing later that day.

Once that situation was somewhat under control, I headed back to the hazard zone that was our dining room. Water was now coming out of two spots in the ceiling and dripping down the wall. 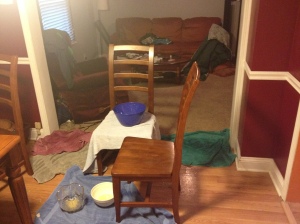 Paul came down to join me in the containment process once he had the bathroom situation under control. After tag teaming towel placement and the strategerie of various bowls and chairs, we stepped back to admire our work.

Paul just put his arm around me, kissed my head, and said, “good morning, beautiful. I’ll call a plumber today.”

And we just moved on with business as usual. I’m lucky to have such a calm, capable, loving partner in crime 🙂

I hope you all had a less adventurous hump day. I will have more to come later 🙂